Michael Iannuzzi opened TYCO's doors in 1971. Michael Iannuzzi, a New Haven native, was a 21-year old junior at Southern Connecticut State University when he first opened TYCO's doors after noticing a need in the academic community for TYping and COpying services. From that vision, the name TYCO was born and TYCO opened in its initial location on Broadway in New Haven.

During its history, TYCO continued to add new equipment, services and employees to bring it to where it is today. TYCO's growth did not come easy. Copying and printing needs have grown since 1971, but so has the competition. TYCO has survived for over five decades for one very basic reason - SERVICE - the kind of service that Michael remembers from the 1950s. TYCO has always been, and remains, a family-owned and operated business where we know our clients by name and they know us. In 1995, Mike's original partner opted for early retirement and Ellie Iannuzzi, Mike's wife, joined TYCO full-time. In 2006, Mike Iannuzzi (son) also joined TYCO to give the business an even greater family feel. Mike is now the owner of TYCO and continues the tradition of focusing on that same level of service started by his father four decades ago.

While TYCO initially focused on serving the academic community, it has grown into a full service copying and printing facility capable of providing a wide range of services. TYCO's client base has also grown over the years and now includes a host of professionals from all areas of business, academia and many individuals throughout New Haven and greater Connecticut. 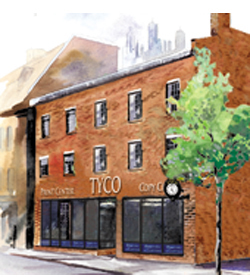